Additive manufacturing by laser sintering is able to produce high resolution metal constructs for orthopedic and dental implants. In this study, we used a human trabecular bone template to design and manufacture Ti-6Al-4V constructs with varying porosity via laser sintering.
Characterization of constructs revealed interconnected porosities ranging from 15–70% with
compressive moduli of 2579–3693 MPa. These constructs with macro porosity were further
surface-treated to create a desirable multi-scale micro-/nano-roughness, which has been shown to enhance the osseointegration process. Osteoblasts (MG63 cells) exhibited high viability when grown on the constructs. Proliferation (DNA) and alkaline phosphatase specific activity, an early differentiation marker, decreased as porosity increased, while osteocalcin, a late differentiation marker, as well as osteoprotegerin, vascular endothelial growth factor and bone morphogenetic proteins 2 and 4 increased with increasing porosity. Three-dimensional (3D) constructs with the highest porosity and surface modification supported the greatest osteoblast differentiation and local factor production. These results indicate that additively manufactured 3D porous constructs mimicking human trabecular bone and produced with additional surface treatment can be customized for increased osteoblast response. Increased factors for osteoblast maturation and differentiation on high porosity constructs suggest the enhanced performance of these surfaces for increasing osseointegration in vivo. 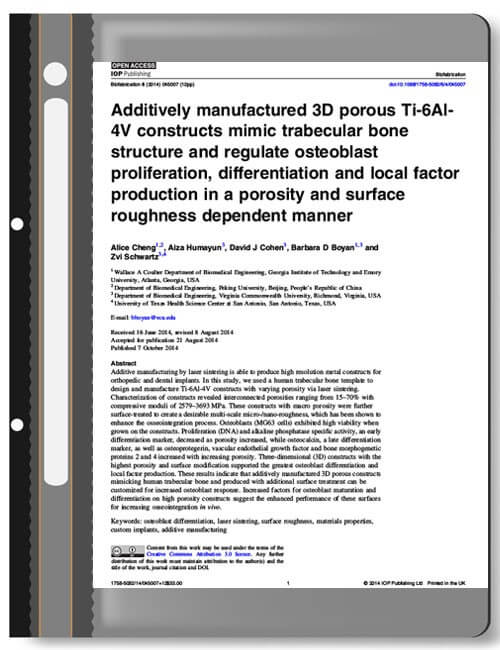