The preparation of the implant site in guided surgery procedure takes place without irrigation, which could lead to increased friction of the drills with the formation and release of debris or metal particles. The presence of metal particles in the peri-implant tissue could represent a trigger for macrophage activity, bone resorption processes, and consequent implant loss.  According to the guided surgical protocol, the study aimed to evaluate the presence of metal particles deposited during implant site preparation. Twenty-five adult porcine ribs from the same adult individual were chosen due to their trabecular bone structure, similar to facial bones.

The samples were all 8 cm (length) × 3 cm (depth) × 2 cm (width) and were further subdivided to obtain 50 elements of 4 cm × 3 cm ×2 cm. Plexiglass was used to create structures such as surgical guides so that their function could be mimicked, and the guided implant site preparation sequence could be performed with them.
The drill kit used in this study is a guided surgery drill kit characterized by high wear resistance, high yield strength, and good corrosion resistance.

This same kit was used 50 times in this way to prepare 50 different implant sites and evaluated at different edges and number of preparation (T0-neutral edge, T1-1 full preparation, T2-10, T3-20, T4-30, T5-40, and T6-50) by SEM-EDX to assess the presence of any metal deposition. The presence of metal residues in the implant site increased according to the cycles of use of the drills. We have observed that in the first three groups, there is no presence of metals. This is evident in groups T3 and T4. Finally, the presence of metal residues becomes significant in the study’s last two groups of samples. The study highlighted how the lack of irrigation in the work site leads the deposition of metal particles and in addition to a reduction in the efficiency of the drills, resulting in less precise cutting, altering the shape of the prepared site, and, lastly, reducing the primary stability of the implants. 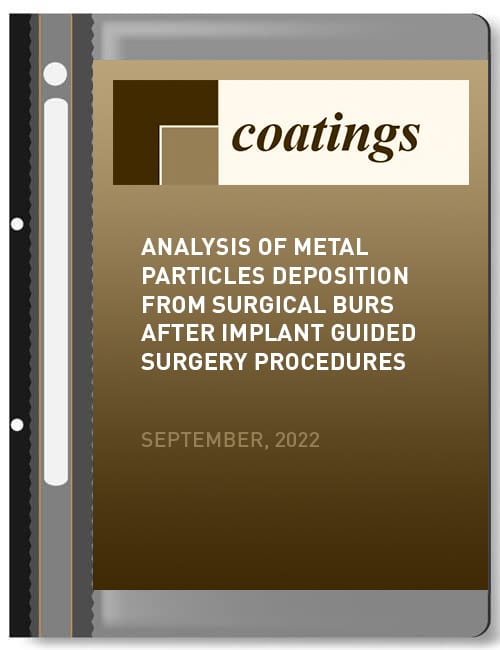