AB Dental history and meaning of the name 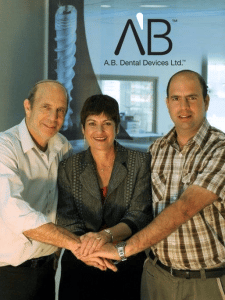 The history of AB Dental

Eliezer Bar Shalom was originally a farmer at the collaborative village where he and Ofra lived for many years.
At that time, in Israel’s early years, the villages were looking to enrich their economy, Eliezer found a failing chip processing factory, and ran it for 8 years. The plant was very successful and became the main subcontractor of Israel Aerospace Industries, Israel Military Industries and more. The plant developed complex parts for Israel’s “Lavi” aircraft project. With the economic upheaval, all subcontracting work was discontinued, and the plant was shut down.

In 1986 Eliezer, a creative man, had to find a way to make a living, and started manufacturing dental implants for local dentists. The business succeeded and grew rapidly.
In 2000 Ofra joined Eliezer, in marketing and building the brand. Together they founded AB Dental as a family company for manufacturing and distributing dental implants, that conquered many markets around the world.

When Ofra and Eliezer Bar Shalom founded the company twenty years ago, they called it
א.ב.ש. – “Alef Beit Shin” in Hebrew letters, which are the initials of Erez Bar Shalom – their first-born son.
“Alef Beit” are the two first letters in the Hebrew Alphabet, equivalent to A & B in the Latin Alphabet. The third letter “Shin” is also the first letter of the Hebrew word “Shtalim”, which means “Implants”.
In 2004, when the company grew, and was intended for worldwide export, its name had to be converted to English. To keep the options open to marketing a wide range of dental products, and not just implants – the name was determined – A.B.Dental Devices Ltd.

We use cookies on our website to give you the most relevant experience by remembering your preferences and repeat visits. By clicking “Accept All”, you consent to the use of ALL the cookies. However, you may visit "Cookie Settings" to provide a controlled consent.
Cookie SettingsAccept All
Manage consent

This website uses cookies to improve your experience while you navigate through the website. Out of these, the cookies that are categorized as necessary are stored on your browser as they are essential for the working of basic functionalities of the website. We also use third-party cookies that help us analyze and understand how you use this website. These cookies will be stored in your browser only with your consent. You also have the option to opt-out of these cookies. But opting out of some of these cookies may affect your browsing experience.
Necessary Always Enabled
Necessary cookies are absolutely essential for the website to function properly. These cookies ensure basic functionalities and security features of the website, anonymously.
Functional
Functional cookies help to perform certain functionalities like sharing the content of the website on social media platforms, collect feedbacks, and other third-party features.
Performance
Performance cookies are used to understand and analyze the key performance indexes of the website which helps in delivering a better user experience for the visitors.
Analytics
Analytical cookies are used to understand how visitors interact with the website. These cookies help provide information on metrics the number of visitors, bounce rate, traffic source, etc.
Advertisement
Advertisement cookies are used to provide visitors with relevant ads and marketing campaigns. These cookies track visitors across websites and collect information to provide customized ads.
Others
Other uncategorized cookies are those that are being analyzed and have not been classified into a category as yet.
SAVE & ACCEPT